I wish to dedicate this exhibition to the memory of my parents and my brother who were killed in the Holocaust with nearly all my relatives. I wish to dedicate it also to the Gypsies, victims of racism as were we, to my Polish comrades, to my companions in misfortune of every nationality, to that group of Germans interned for their anti-Nazi convictions – a minority that never ceased to sustain and assist us.
Thus the stanzas of the Erlkönig that so strongly allude to our fate will ever remain engraved on my memory; a German intellectual, prisoner for many years, often recited them to me with other poems of Goethe, to spur me to courage and to comfort me.
I dedicate this exhibition to those who were incarcerated as we were in Birkenau and Buna and who died in atrocious pain; to those who underwent the death march when the Russians entered Poland; to my companions in misery of Dora-Nordhausen and Bergen-Belsen; to those who survived, the unwilling witnesses of a ghastly ordeal; and last to those who are forever locked in the prison of their memory.
… Lastly, I want to associate with this exhibition my beloved children Tzila and Aviel who ever since their earliest age have shared with me the love or art and to whom, I trust, I have passed on the torch.

Excerpts from the preface written by Jan Krugier during the exhibitions of his collection.

May 12, 1928 - Born in Radom, Poland, to a Jewish family. His father, a factory manager, is also a modest and passionate art collector. He teaches him to look at painting, especially through the black and white reproductions of the small books published by Braun by putting tracing paper on the reproductions; explains the golden ratio, the vanishing point, cold and warm colors, and chiaroscuro.

1933 - His mother dies giving birth to his brother Philippe, to whom Jan feels extremely close to.

1939 - Nazi invasion of Poland. An officer of the Polish army, his father dies fighting the army of Reich. His mother-in-law, his younger brother and his entire family are deported to the extermination camps. Jan survives by jumping from the train en route to the concentration camps.

1941 - Active in the Polish Resistance, working as a messenger. Clandestinely places bombs in the toilets of the Bristol Hotel in Warsaw.

1943 - Arrested and imprisoned in Buna, a labor camp in the city of Auschwitz. A few months later, Jan is sent to Auschwitz-Birkenau, a death camp; catches typhus and suffers horrifically. He experiences the anguish of death every day.

1944–45 - Allied aircraft bombard the chemical plant "IG Farben". The Nazis relocate the prisoners and impose the monstrous "death march" that takes him to Dora-Nordhausen and later to Bergen-Belsen.

In April 1945, Bergen-Belsen is liberated by the English. The only survivor of his family, he is brought to Switzerland by the Red Cross, which had created a new organization especially to help child victims of war (CRS-SE).

1945–48 - He is adopted in Zurich by philanthropist Margaret Bleuler. Her family collects works by Hodler, Amiet, and Balthus, among others. He thus regains the artistic climate of his childhood and the connection with his lost father, but goes through a phase of rejection of art and cannot reconcile himself with the horrors he witnessed during the war. He meets Martin Buber, the great philosopher of German origin. The latter, with patience and gentleness, helps him to overcome the trials lived, to tame his rebelliousness and to rebuild an identity. This is how he rediscovers a love of art that will transcend his life. Jan is enrolled in the Kunstgewerbeschule (School of Applied Arts) in Zurich where he is taking lessons under the painter Johannes Itten (1888–1967), formerly a teacher at Bauhaus, and attends the School of Fine Arts. Goes to paint in the Grisons, where he meets Alberto Giacometti. A friendship develops between them. First stay in Geneva. Learns French. Meets Madeleine Spierer.

1949–52 - Jan decides to train in Paris. Enrolls in André Lhote’s school but only stays there for one day. He moves to Montparnasse and it becomes his preferred neighborhood. The encounters are rich and exciting. Rub shoulders with artists such as Jean Dubuffet, Nicolas de Staël and Charchoune. Develops friendships with artistic and literary figures: Samuel Beckett, Peggy Guggenheim and many others. Opens a small art school in the Cité Falguière district in the heart of the 15th arrondissement; gives painting classes to partially meet his material needs. Jan is a very good art teacher. He feeds on museum visits. Reunites with his friend Madeleine Spierer with whom he has serious fun drawing rhinos at the Vincennes zoo. Meets Madeleine's sister, Eva, known as Vivette, a student of the School of Decorative Arts in Paris. They are hitherto inseparable. Jan has a very good eye but has great difficulty facing a blank canvas due to his war experiences. His faithful friend Giacometti tells him: “You make me laugh, you in front of your blank canvas; you engage in a monologue when you need dialogue” and advises him to become a gallery owner and to work with young creators because “he understands artists better than anyone else.” After some reflection, Jan decides to become an art dealer.

1955 - Works at the Jacques Benador Gallery, the first modern art gallery in Geneva.

1962 - Opens his first art gallery (Krugier and Co.) at 5 Grand-Rue in Geneva in the Old Town, with the help of the Spierer family. Exhibits: Bram van Velde (October 1962), Alexej Jawlensky (February 1963), Wilfredo Lam (April 1963), Alberto Giacometti (summer 1963, the first time his works are presented in French-speaking Switzerland), Giorgio Morandi (1963, his first exhibition held abroad), Oskar Schlemmer (1964), Jean Pougny (1964) and Odilon Redon (1966), as well as young artists of the time Domenico Gnoli (1970). Organizes very avant-garde thematic exhibitions. Publishes a series of catalogues called "Suite," which become important tools for the business, accompanying each exhibition and contributing by their quality to the gallery’s renown. Often with texts by poets such as André Pieyre de Mandiargues or museum curators, the catalogues are constructed only from leaflets due to lack of money.

1970 - Begins to collect works on paper that cover five centuries of Western art; his criteria are that the drawings be of high quality and bear witness to life’s grandeur.

1972 - Moves his art gallery (Jan Krugier Gallery) to 3 Grand Mezel Square (inaugurated November 10, 1972). The Jan Krugier gallery contributes to all the major international art fairs and is noted for the quality and originality of its stands.

1976 - Becomes, during the succession of Pablo Picasso, the representative but also the consulting friend of Pablo’s granddaughter, Marina Picasso. Promotes the extraordinary collection of Marina Picasso to the world.

1987 - Opens a new space (Jan Krugier Gallery) in the prestigious Fuller Building in New York, at 41 East 57th Street on Madison Avenue. His daughter Tzila works alongside her father until his death.

1996 - Receives the insignia of Commandeur de l’Ordre des Arts et des Lettres by the Ministry of Culture from the French Republic. "This distinction is intended to honor individuals who have distinguished themselves by their creations in the artistic or literary field or by the contribution they have made to the influence of the arts and letters in France and the world." (French Republic, Paris, October 2, 1996).

2010 - Tzila and Aviel Krugier create the Jan Krugier Foundation in memory of their father dedicated to drawings by Old Masters dating from the 14th to the 18th century. 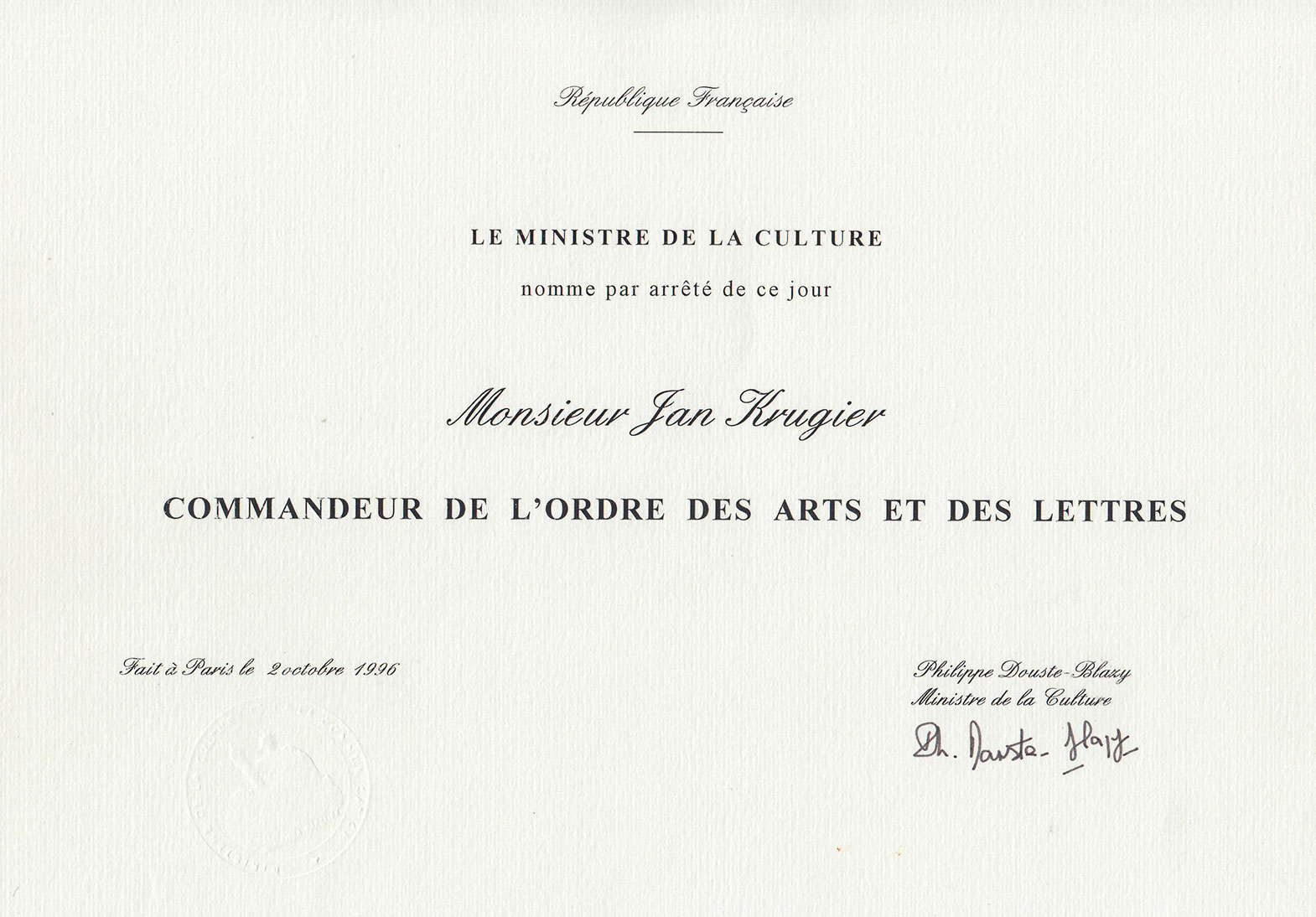